The Sierras of Southern California

I saw a cartoon strip on Pinterest where a zombie was pictured smiling up at a red balloon in his hand. In the next scene, the zombie was sad as his arm had ripped off and was floating away with the balloon. At the bottom was the caption, “Happiness is fleeting.” I laughed and laughed, then took a screenshot and continue to laugh each time I see it. But isn’t it the truth? A few days ago was the longest and hardest (or possibly a close second) climb I’ve done. It took hours upon hours to do a 2,400 elevation gain. It very nearly defeated me. As I hobbled my way over the crest and could, alas, see the canyon on the other side, I raised my trekking poles to the sky in triumph. I did it! I conquered that mountain! I was smiling to myself as I made my way down the other side for no more than 5 minutes when a spindly man in his early 70’s, wearing a full backpack, jogged past me. He wasn’t even sweating. As I stared at his skinny little legs kicking dust at me as he passed, my face settled back into a frown. Happiness is fleeting.

Ending the day with a cold evening and a great view

It has been a challenging week or two to say the least, but I have had a lot of moments of feeling good. I have climbed mountains, sometimes more than once. I have been frustrated and exhausted. I have also spent quality time with my family. Last week was the end of my slackpacking (leaving my pack at home and being picked up each night). My mom walked with me out of Wrightwood and we had fun walking to Devil’s Punchbowl where my dad barbecued tri-tip for dinner. Hiking out of there was the most difficult, and I apparently was the only one who chose that detour around an endangered species closure. No one was around, water was scarce, and the bugs were relentless. Even the ladybugs bit! Back on the mountain was gorgeous and there was wonderfully cold, flowing water. It was like snow melted straight into my mouth. 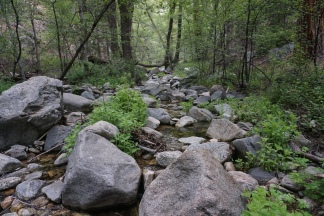 From there, it was a huge fire area. I stopped at the Mill Creek Fire Station and met several awesome people moving at my pace and feeling somewhat discouraged. We all vented and had a little therapy session. My brother, Brent, met me there on Friday and we hiked the next day. 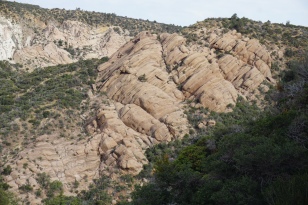 Now, I must preface this story by telling you that Darlings are notorious for adventures… or misadventures. Trips with us tend to be exhausting, because things just have a tendency to go awry. Our hike was supposed to be an easy 12 miles to a campground where our parents would meet us with our stuff. Naturally, we left all but food and water in my brother’s car with the assumption that our plan would work out. It was a hot day and we were working through our water. Along the way, Brent was realizing the things he left behind, such as lunch, or fuel to cook food later. He ended up cold-cooking his food and it didn’t come out that great. We walked along an abandoned road because the PCT is often an illogical path.

We walked through what was once a conservation camp but is now nothing but untouched, charred remains of buildings where people died. It was unsettling. On the top of the mountain, the only things with much life were the abundant lupines growing in the burn. We looked down at our meeting point and found it to be closed. We were running low on food and water and knew the next water source was another 6 miles away. In contacting our parents, we found that they couldn’t find any roads open to the area, so we made the decision to continue to the water. A couple miles later, we were both out of water. Saving energy, we switched back and forth from trail to road, sometimes having to bushwhack our way. We rested often in the shade until finally making it to the water cache. There was also a cooler of cold sodas for sale. That was the best Sprite I’ve ever had. We talked to our parents again to find the roads were still closed to where we were. It was windy and the sun was going down. If we had our things, we would have camped, but that was all in the car. We were out of food, but did fill up on water. I told a girl I met the day before what was going on and someone at the table donated a couple of Clifbars to us. We were about to do another 8 miles.

400 mark that someone made out of pinecones

The sun was setting as we tried to get a little rest, but there was no point. We left the comfort of other people and made our way down the mountain with already sore bodies. The trail seemed to go on forever. We stopped on a ridge to eat Clifbars and get out our flashlights. We calculated that we would get there by midnight and continued our journey by the light of our flashlights. We could eventually see lights of the valley below. When we reached the valley floor, we thought we had less than a mile to go. We were wrong. The PCT sent us back up into the hills and we were both angry about it. It was at least another 3 miles. At each parked car below, we flashed our lights until one finally flashed back. We found our parents and made our way to the base of the mountain where dad set up chairs and mom made quesadillas. It was 11:30p.m. when we arrived and we had been hiking since 7:30 that morning. We did 26 miles and we were exhausted and slept right there in the parking lot. All in all, I had a great day bonding with my brother, even if we felt beat-up afterward.

Top of Mount Gleason with Brent

The next day, mom made burritos and Brent got ready to leave. My parents fed every hiker that passed by, giving them either a burrito or beer. Everyone was really excited. The rest of the day was filled with errands and resupplying. I had a breakdown. I’ve been feeling overwhelmed and told my mom about it. We both cried as they left that night.

It has come time to make a tough decision. Stay or go? I made it 454 miles to Agua Dulce and the heat was too much for me. I called my mom at the end of another hot day and told her I want to jump (move ahead). Tomorrow, I will be jumping 200 miles to Walker Pass and will return in fall to complete the section I didn’t do. Of course I would love to do this in order but I underestimated the heat and overestimated my speed. I expected to be past the desert before June, but it didn’t happen. Jumping ahead will mean I’m closer to making my goal date and I won’t die of heat stroke in the desert. Now I will be tackling the extreme snow conditions in the Sierras. This has been the biggest snow year since 2011. Some places are impassable right now. Some places that are usually tiny creeks are now raging rivers. The adventure continues… just farther up the road.

Much of my day is controlled by my mindset. If I let one bad thought in, it can ruin my whole day. It has been such a long week, my thoughts tend to be negative. I let myself stew about that one sideways glance that other hiker gave me. Or linger on the fact that someone didn’t say hello. Out here, there are a lot of great people, but there are also those who are petty and judgmental. The petty ones are very judgmental of day hikers, which they all thought I was without my huge pack.

Reflecting on Where I’ve Been

There is a lot of time to think, and that isn’t always a good thing. I’ve come to notice that my mind veers toward negative thoughts because they seem the easiest to dwell on. Perhaps my mind is looking for easy to make up for everything else being so hard.

It has been an eventful couple of weeks. I’ve been “slackpacking” (walking without the burden of my pack and having my parents pick me up every night) for a couple of weeks as I go through our mountain range. Now that I’m making my way up into my 4th mountain, I’ll soon be on my own again. But I’ve been making better time, doing 12-14 miles per day, up from the 7-8 miles I was doing in the beginning. I can feel myself very slowly getting stronger. Now, I only hurt a lot instead feeling like my limbs are trying to rip from my body. Progress. 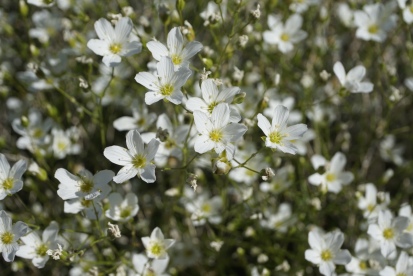 I was really sad at the beginning of the week as I was still thinking of my poor dog being bit by the snake. And I was walking through the part that she loves because there is a lot of water to play in. I was dwelling on that when a hiker came in the opposite direction and gave me three little caramels. It was enough to perk me up for a while until the heat set it.

The heat on Monday and Tuesday was atrocious. I passed the 300 mark and walked a little more to meet my dad on a Jeep trail. Being so exhausted, I didn’t think about my phone being in my pocket as I was getting on the back of a motorcycle. Of course it fell out and then was run over by the hummer behind us. Brilliant.

Walking along Deep Creek was gorgeous. There is so much to see and so many swimming holes I’d like to visit when I’m done with this hike. There were even wild burros, and I had no idea they even lived in the area. I soaked my tired feet in the ice cold stream flowing into Deep Creek, then filtered a liter to drink. I went through 5 liters that day and still ran out. I fell asleep in the shade, just past the hot springs, with my feet in the water. It seems that every time I sat down that day, the heat put me right to sleep. I was deeply nauseated by the end of my 14.3-mile day that at one point, I bent at the waist an prepared to vomit. It didn’t happen, but it was that close. The cruel thing about walking along Deep Creek is that you’re right next to the water, but it’s down a 100-foot cliff. I never had it in me to find a way down. 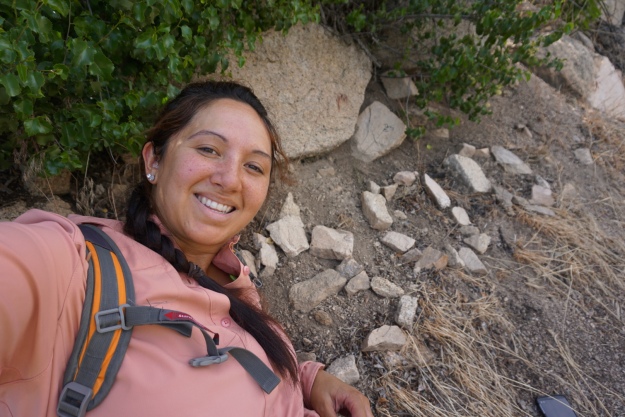 I made my way past Silverwood Lake, down to the 15 freeway, then on my way up into the next mountain, I ran into Reed and Nicole (the ones who helped carry Morrigan to the road)! I gave them both big hugs and was so excited to see them, it absolutely made my day. Apparently Reed got heat exhaustion on the same day I did, but he actually did vomit. They hitched a ride into the mountains and were now doing that section backwards so he could recover. We were all excited that it had been cool ever since.

I am tired but I’m pushing forward. I haven’t mastered my thoughts but I’m working on it. I am climbing another mountain and feeling proud of myself. My mom was thinking about it on the way home the other day and said, “When you’re done with this thing, you’re either going to be in really great shape or dead.” I laughed for a full minute. Yes. 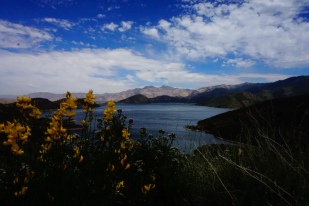 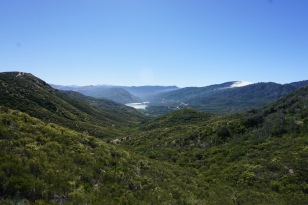